Welcome to the official blog of The Male Bag Ride 2013. 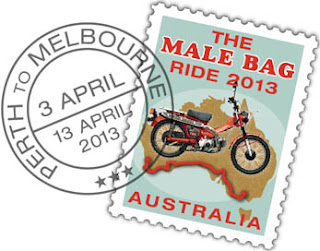 The odyssey that is the 2013 Male Bag Ride was conceived nearly two years when Julian Dewan and Tony Clayton sat down over a glass of red and looked for the next adventure of a lifetime after having done Kokoda in 2007.

Neither Julian nor Tony could have foreseen on that night what would become he adventure of a lifetime for 32 other blokes who would join them as either a rider or one of the extremely important support crew.

As at the launch of this blog there have been funds raised in excess of a quarter of a million dollars and sponsors have been brought on board from all types of industries and blokes from a variety of backgrounds to take part.

26 blokes will leave Perth aboard Honda CT110 3ex-postie bikes headed for Margaret River with the eventual end point home to Melbourne (for all but 1 of the gang) and a lap of honour at half time of the Melbourne v West Coast game at the home of sport the famous “G”.

Along the way the will be stops at Albany, Esperance, Balladonia, Eucla, Ceduna, Port Augusta, Adelaide, Mount Gambier and Lorne.

That means the awesome scenery of the South West Coast, former whaling ports, the Nullabor Plain, the Great Australian Bight, the Coorong, the wine country of South Australia, the volcanic lakes district around Mount Gambier and then one of the most famous driving and riding stretches of bitumen in the Australia if not the world, the Great Ocean Road and Bells Beach.

What we will see and you can follow is a “boys own adventure” straight out of the story books of many a man’s  life.

Naturally we want you to participate.

We will be uploading photos, stories, fables and of course it would not be a trip without some bloopers.  What you won’t read here though is everything, because as we all know, what happens on tour stays on tour. 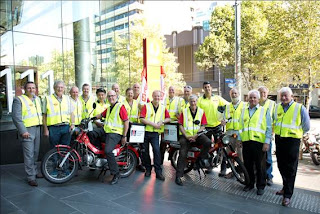