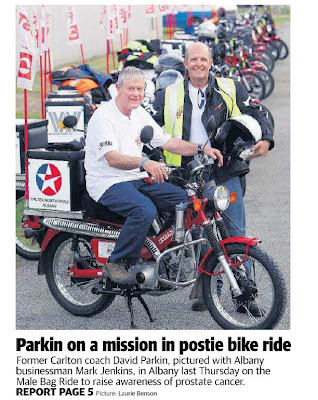 who rode their postie bikes into Albany last Thursday as part of a ride across Australia to raise awareness of prostate cancer. Albany was the second stop for the 26 riders, who are riding 110cc Honda ex-postie bikes from Perth to Melbourne in the 11-day trek, aptly named the Male Bag Ride.
Mr Parkin, a prostate cancer survivor, joked he had managed to “only fall off the bike three times”
by the time the bikers reached Albany Men’s Shed. He said many men struggled to speak openly
about health issues, and praised places such as Albany Men’s Shed for fostering men’s mental and physical health and wellbeing.
“On the other hand, talking about breast cancer, women are wonderful at this, they have done the research,
raised the money, they support each other and get together to talk about it,” Mr Parkin said. “But men don’t. Places like Men’s Sheds are some of the few places men are side-by-side and can talk about this sort of thing.
“If you look at the McGrath Foundation for breast cancer, they now have … (81) McGrath breast cancer
care nurses around Australia, but men only have 13 of those nurses to help men in that post-operative
stage after prostate cancer.”
Mr Parkin said his aim was to help raise money to fund more community nurses to help men
through prostate cancer. By last Thursday the ride had raised $350,000 for the Prostate Cancer Foundation of Australia.
Albany’s Mark Jenkins, owner of the Caltex service stations on North Road and York Street, is also taking part in the Male Bag Ride. The Male Bag Ride will reach Melbourne on Saturday, April 13, where riders will do a lap of honour around the MCG during half time of the West Coast Eagles’ clash with the Melbourne Demons.